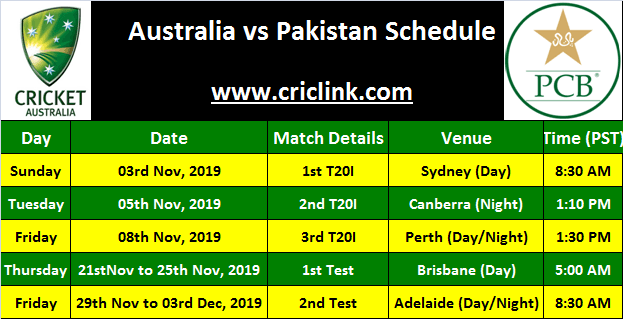 Pakistan cricket board have confirmed schedule for Pakistan tour of Australia 2019. As per the announced schedule Pakistan will visit Australia in November – December, 2019.

Schedule for Pakistani cricket team in Australia in 2019-2020 season will be as follows:

If we look at Pakistan vs. Australia test record overall than Pakistan may come up with some respectable figures with having win ratio of 23.43% but it will drop down to 11.4% when Pakistan takes on Australia at their home soil.

Australia was never a happy hunting territory for Pakistan test sides. If we want to have a look at Pakistan last test win in Australia than we have to go back to almost 24 years, when Wasim Akram led side flattened host by 373 runs to record consolation win in final test of the 1995 series. Since then Pakistan had played 12 test matches in Australia and lost all 12 despite having services of world class players most of the times.

Over all Pakistan have played 35 test matches in Australia and only won 4 of them, lost 24 and drawn 7 times with win ratio of just 11% down under.

Mushtaq Mohammad leading the way for Pakistani skippers in terms of winning matches in Australia, he has 2 wins under his belt one each in 1977 & 1979 series. Javed Miandad 1981 & Wasim Akram 1995 are the only other two captains to have registered wins in Australia.

Above record and statistics giving us a view about the upcoming hardships Pakistan young team have to face in upcoming test series in Australia which will have more weight age because of ICC test championship.

How To Play Cricket – Step By Step Guide