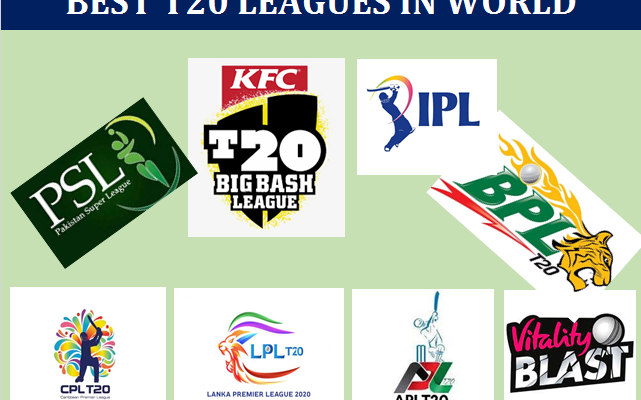 Here we are providing a brief overview of every T20 league in the world and also try to provide all details for all T20 competitions in the world so that cricket fans can decide on their own.

IPL can easily be rated as the #1 T20 franchise cricket league in the world. IPL has the most # of teams participating as well as the most number of editions (15 in total) that have been organized so far. IPL also offering a massive winning prize of USD 2,696.258 which is much much much more than the second-placed Pakistan Super League. IPL was inaugurated in 2008.

Pakistan Super League is not among the oldest T20 leagues but the prize money they are offering for the winning team is second best after IPL. PSL winning team gets USD 505,000. PSL is also expanding and there are hints that prize money for the upcoming PSL edition will be much higher than offered currently. PSL’s first edition took place in 2016.

Big Bash League is Australia’s pioneer franchise T20 league and they are much older than PSL and engage much more energy in competition by having more international players but their winning prize makes them 3rd on the list of best T20 leagues in the world. BBL winning prize is USD 450,000. Big Bah League was founded in 2011.

CPL is the West Indies trademark T20 tournament. Just like West Indian cricket, CPL brings lots of flair and excitement to world cricket. CPL winning team prize money is USD 429,799 and so far its 9 editions took place since its inception in 2013.

England is the founder of T20 leagues and their tournament named T20 blast is the first T20 league in the world. So far 20 editions of blast took pace with number of participating teams are 18 which is the highest amongst all T20 franchise cricket leagues taking place in the world. Blast prize money is USD 236,127 for the winning team. Blast 1st edition took place in 2003.

Bangladesh Premier league started in 2012 but was only able to organize 7 seasons of their home T20 league in 9 years. Their prize money for the winning team is USD 236,099 and this placed BPL in 6th place in our best T20 leagues list.

Sri Lanka’s very own T20 franchise cricket league only started earlier this year but their efforts and continuity to host another event same year ranked it on 7th place in the list of best T20 tournaments in the world. The winning team prize money of LPL is USD 100,000.

SA20 league is another new T20 franchise tournament in busy schedule of T20 leagues taking place around the globe. It is owned and operate by South Africa and will look forward to establish it for a longer stay at top level comparing to other two leagues of South Africa which failed.

International League T20 tournament is UAE’s own franchise based T20 league which will feature 06 teams. Each team can have as many as nine overseas players whereas two places in eleven will be reserved for UAE local players which will help in developing their game. First edition of this league will take place in January 2023.