Cricket is expanding its wings globally and United States of America is one of the fastest emerging cricket nation of late. For cricket fans in USA ESPN+ is providing live cricket streaming option for all viewers residing in USA. ESPN+ Live is owned by Disney Media in partnership with ESPN.

India vs West Indies 2022 series will start from 6th February in Ahmedabad. All matches of West Indies tour of India live streaming on ESPN+ for cricket fans residing in USA.

Bangladesh tour of New Zealand 2022 comprises of 2 test matches that will start from 1st January 2022. All matches of Ban tour of NZ Live on ESPN+ for all viewers in USA.

New Zealand vs Bangladesh 1st Test lives on ESPN+ as this channel has the broadcast rights of all New Zealand matches.

New Zealand tour of India 2021 is all set to start form 17th November, 2021. India will host Host New Zealand for 3 T20 Internationals and 2 test matches. all matches of India vs New Zealand live streaming available on ESPN+ for viewers in USA and surrounding areas. 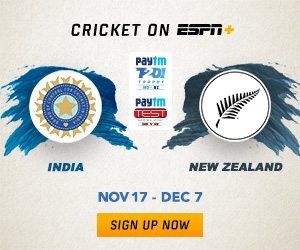 For Indian cricket fans it is a good news that online streaming of Ind vs NZ series will also be available in HIndi as well as in English.

ESPN+ doesn’t have a separate however you can unlock ESPN+ live content on ESPN app once you subscribe to ESPN+. When you are opting for ESPN+ applications than possibilities are immense you can use this on phones, tablets, laptops, Roku players, Fire TV products, Apple TV, Android TV, Chromecast, PS4, Xbox One, and Samsung smart TVs etc etc.

ESPN+ available on Xfinity Flex & XfinityX1 & on below models: