Hanif Mohammad was born on 21st December 1934. One of the finest batsmen Pakistan ever produced and the original little master world cricket has witnessed. Hanif Mohammad was the main stay of Pakistan’s batting in early days. He still holds the record for longest test innings played by a batsman and highest individual score by a Pakistani batsman in test innings.

He scored 3915 test runs with 12 centuries to his credit in 55 test matches during his 17 year test career. Patience was the key trait of his batting. He batted for 970 minutes against West Indies and scored mammoth 337 runs to save a test match on a deteriorating pitch at Bridgetown 1957-58. It was also Hanif Mohammad highest score.

Another feather in the cap was obtained when he scored a captain’s knock at home of cricket Lords as he scored 187 not out in an attempt to save his team from crushing loss as at one point Pakistan lost its 6 wickets for 99 runs; but it was Hanif Mohammad’s valiant effort which saved Pakistan from defeat his performance was greatly hailed by cricketing pundits and Hanif was named as a Wisden cricketer of the year for his heroics in 1967. Hanif Mohammad name was also written at Lords Honors Board for this great achievement. Hanif Mohammad was also inducted in ICC hall of fame for cricket in 2009 in recognition to his services for cricket

He was also instrumental in domestic circuit. Hanif Mohammad scored 499 runs in a first class match in 1959. Unfortunately Hanif Mohammad got runout on 499.  This stood as a highest individual score by a batsman in world cricket for next 34 years until Brian Lara of West Indies surpassed it by scoring 501 runs in a county match. Hanif Mohammad stats are staggering at first class level where he scored 17000 runs with 55 centuries under his belt. An occasional wicket keeper Hanif Mohammad also keeps wickets for Pakistan in their inaugural test match against India in 1952-53.

Hanif Mohammad captained Pakistan during 1964-67 but failed to make an impact as he bagged 2 wins and 2 losses in his 11 test as Pakistan’s leader; but it was mainly due to lack of resources that he had to deal with.

Hanif Mohammad at age 81,  passed away in 2016  in Karachi, but he will remain as a shiny star of Pakistan cricket forever. 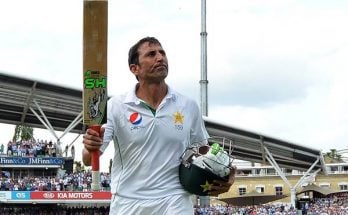